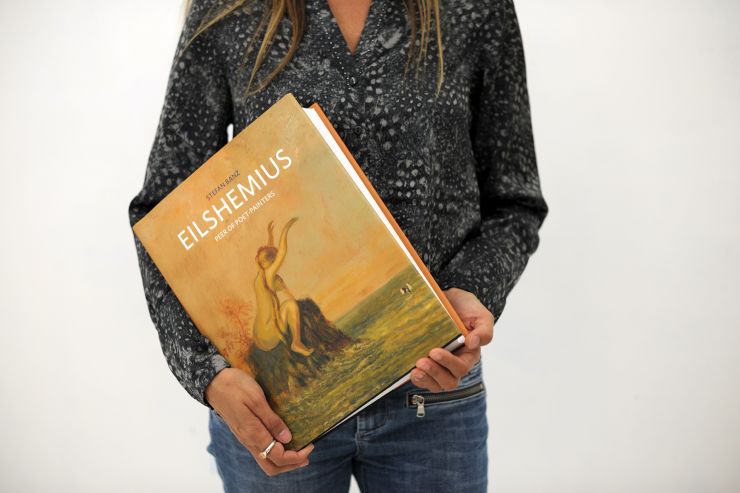 Release: 11 September 2015
Stefan Banz, Eilshemius: Peer of Poet-Painters. Collected Documents, a Novel of Facts, by and about Louis M. Eilshemius, and a Study of his Influence on Marcel Duchamp

Winner of the 2016 Peter C. Rollins Book Award, and of the 2016 Eric Hoffer Book Award. The publication was also shortlisted for the 2016 Jan Michalski Prize for Literature in Switzerland.

Release: 11 September 2015
Stefan Banz, Eilshemius: Peer of Poet-Painters. Collected Documents, a Novel of Facts, by and about Louis M. Eilshemius, and a Study of his Influence on Marcel Duchamp

Winner of the 2016 Peter C. Rollins Book Award, and of the 2016 Eric Hoffer Book Award. The publication was also shortlisted for the 2016 Jan Michalski Prize for Literature in Switzerland.

Louis Michel Eilshemius (1864–1941) was a fascinating outsider of the New York art scene whose entire oeuvre had remained practically unknown to the general public. Not until Marcel Duchamp discovered him—at the age of fifty-three—in the famous first exhibition of the Society of Independent Artists at the Grand Central Palace in New York in 1917 did he attract the attention of the international art world.
Following his discovery, Duchamp and Katherine S. Dreier organized Eilshemius’s first solo exhibitions in a public institution at the now legendary Société Anonyme in New York in 1920 and 1924. Eilshemius’s name was suddenly on everyone’s lips: some of the most prominent art critics of the time wrote about him and some of America’s most influential collectors began to take an interest in his work. Eilshemius himself, exhausted and frustrated by his years of failure and having grown increasingly eccentric, and perhaps also somewhat confused by the sudden change in the reception of his art, gave up painting in 1921. His works, on the other hand, received ever-greater recognition and were exhibited in the most reputable galleries of New York. Thus it was that between 1932 and his death in 1941 there were more than thirty exhibitions of Eilshemius’s work, with at one point in 1939 three shows running concurrently.
Though today many museums in the united states and collectors of international renown possess works by Eilshemius, the artist has faded into ever-greater obscurity, especially since the advent of Pop and Minimal Art.
Eilshemius perfectly exemplifies—in an age of mass-oriented biennials and art fairs—the idea of the individualist who resolutely goes his own way, one of the reasons that his work appears to us today more contemporary than ever.
In this comprehensive book on Louis M. Eilshemius, Stefan Banz has gathered together an abundance of astonishing and hitherto unavailable and/or unknown documents, the nucleus of which are Eilshemius’s countless and controversial letters to the editor that appeared in such American newspapers as the New York Sun and the New York Times. This correspondence allows us to not only to see his oeuvre in a new light but also to reappraise Eilshemius’s art in all its intimacy and uniqueness.
In his expansive essay, Stefan Banz is the first to explore the question of whether and to what extent Eilshemius influenced Duchamp’s artistic thinking, and also whether and in what way he inspired Duchamp to open new doors for twentieth-century art.
Finally, this book brings together works from over seventy institutions and private collections, thus giving the reader a profound insight into the fascinating oeuvre of this unusual artist.

SOME EXPERT’S REACTIONS ON THE BOOK:

New York, October 25, 2015
There is no question that your book represents a monumental achievement, one that will change the scholarship on Eilshemius and, to perhaps a somewhat lesser degree, Duchamp (and I say that only because a book on Eilshemius will probably not receive the same degree of circulation and readership that books on Duchamp usually get). The central question that you address in your study—why did Duchamp take such an interest in Eilshemius?—is of great interest to me, and you’re probably right in noting that I and several subsequent colleagues have dismissed the central significance in this attraction by having dismissed the quality of the paintings. That having been said, I think Duchamp’s attraction to Eilshemius can be traced to the rejection of his Nude Descending a Staircase from the Salon des Indépendants in 1912, an event that he said gave him “a turn.” I believe that turn was a 360-degree departure from the art world, not from art (as people mistakenly conclude), but from the hoops an artist is excepted to pass through in order to be part of it. He hated not art, but the entrenched system that existed in order for someone to survive as an artist, the judgement that had to be passed on someone’s work before it was given recognition and acceptance. He knew that Eilshemius rejected that same system and had been fighting against it for years (evidenced, in part, by his continuous barrage of letters to the newspapers). Francis M. Naumann

Richmond, Virginia, December 25, 2015
I am truly enjoying reading your book. congratulations! What a remarkable accomplishment this publication is. Eilshemius has always needed a critical champion and you have destroyed so many myths and misconceptions, and in doing so have allowed us to see his paintings as if for the first time. As you may know, Jealousy hung above my desk at the Philadelphia Museum of Art for 15 years while I was a curator there and I still consider it Eilshemius’s greatest painting, but after your book there are so many paintings that I want to see. Michael R. Taylor

Amsterdam, February 14, 2017
Hi Stefan, thank you for (your) book. It is truly a masterpiece. Within a few minutes after opening it I learned things about Eilshemius that I didn’t know already and I thought I knew a lot. Peter Schuyff